Basic Primer on Land Use & Zoning

We talked in our last piece about the parties to a lease, and the nuances of that requirement.  Today, as promised in our last post, we discuss the “leased premises”.

A lease is a contract.  It is a contract in which the lessor (think, landlord or tenant/sublandlord) grants to another person or entity, called the lessee (think, tenant/sublandlord or subtenant), the right to possess and use a definite portion of land and/or a structure for a definite term in consideration of rental payments, all of which is specified in the lease contract.

Ok, so, generally speaking, a lease in North Carolina should be in writing and should probably be recorded.  But what should the lease say?  Well, there is more discretion between the lessor and lessee in a commercial lease context (see, e.g., Gardner v. Ebenezer, LLC, 190 N.C. App. 432 (2008)) than in a residential context (see, e.g., N.C.G.S. 42-38, et seq.), in terms of what can and cannot be contracted to.  But, any lease in North Carolina must contain the following: (a) the name of the lessor and the name of the lessee, (b) a description of the leased premises, (c) a designation of the term of the lease, and (d) a statement of the rent.  Today, in the second part of this series, we’re going to address (b) the description of the leased premises.

As is human nature, “who gets what?” is one of the more important questions in any transaction; leases are no exception.  The lessee has an exclusive right to enter and to have possession of the described premises (sometimes referred to as the “demised premises”), and the lessee has this right against the landlord as well as against third parties.  Note that: any unauthorized entry by the landlord upon the demised premises is as much a trespass to the lessee as it is when the unauthorized entry is by some third party.  Accordingly, the description of the leased premises — the “who gets what?” — is critical.

To avoid any confusion (and, of course, to render the lease valid), a lease instrument must identify, and identify correctly and carefully, the leased premises.  A description of the leased premises specifies the boundaries and extent of possession to which the lessee is entitled.  The method of description of the property may be the same as that used in other conveyances, such as deeds, or some other description provided it is sufficient to avoid latent or patent ambiguities.  In other words, as complete a legal description as is possible will minimize confusion or future issues.

This is easier said than done, especially where there are multiple spaces in a single building or multiple buildings on a single parcel, or multiple  In this vein, lessors and lessees should be advised of this legal principle when considering how much or how little to define by the leased premises:

“It is a settled principle of the law of property that a conveyance of land, in the absence of anything in the deed indicating a contrary intention, carries with it everything properly appurtenant to, that is, essential or reasonably necessary to the full beneficial use and enjoyment of the property conveyed, and this principle is equally applicable to a lease of premise. In leases, as in deeds, ‘appurtenance’ has a technical signification, and is employed for the purpose of including any easements or servitudes used or enjoyed with the demised premises. When the term is thus used, in order to constitute an appurtenance, there must exist a propriety of relation between the principal or dominant subject and the accessory or adjunct, which is to be ascertained by considering whether they so agree in nature and quality as to be capable of union without incongruity. Moreover as in the case of conveyances, whatever easements and privileges legally appertain to the demised premises and are reasonably necessary to its enjoyment ordinarily pass by a lease of the premises without any additional words. Parol evidence is admissible to show the meaning of the term appurtenances’.” 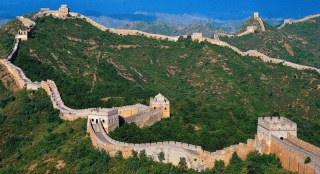 “Lot 42, which is all of northern China on the other side of this wall.  Also, the basement.”
Mike Thelen practices in Womble Carlyle’s Real Estate Practice Group out of the Firm’s Raleigh office. He regularly represents a wide variety of clients, from local governments to businesses, in land use and real estate development litigations and transactions in state and federal venues throughout North Carolina.
Follow the North Carolina Land Use Litigator on Twitter at @nclanduselaw here.